JR and Vhils hit up the streets of Los Angeles before their exhibit at Lazarides titled “EuroTrash”.

Immortalizing the individual in monumental proportions is what these exciting artists do best. Using the overlooked, misunderstood and mundane elements of our everyday, each artist captures our attention with their distinctive style and alternative approach. Sharing a vested interest in their individual and collective surroundings and society, they poetically express a desire for universal appreciation. 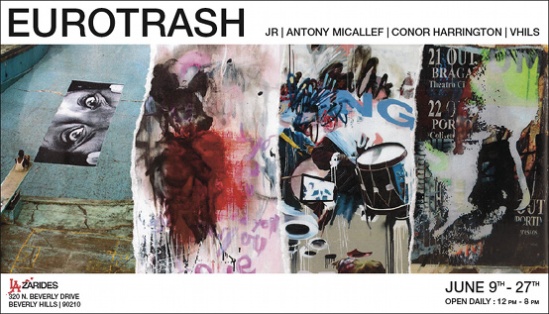 Having presented his portraits of women in Brazil, Liberia, Sierra Leone, Cambodia, India, Belgium, Britain and other countries, JR is showing the whole of his “Women” exhibition for the first time.

After “Portraits of a Generation”, inspired by events in the suburbs of Paris, and “Face 2Face”, which was displayed in the Middle East, “Women” is the third phase of the 28 Millimetre project, taking its name from the wide-angle lens that requires the photographer to be only centimetres from the model in order to take the portrait.

WOMEN ARE HEROES
WOMEN grew out of many pictures and few words. JR’s words were necessary, of course, to convince more than 70 women around the world to take part in the project. JR went to meet those living in the shadows, the real pillars of their societies despite daily violence, wars or simply discrimination. His desire to shift certain limits by using unusual places allows him to deal with subjects in the news in an innovative way. From 3 October to 2 November, through thris exhibition and a book, people will learn all about this adventure that took JR to ten countries on four continents.

JR continues to spread his art across the world, in his latest journey he covers an entire Aqueduct in Rio.

Previously: JR In Cambodia, JR in Kenya + Women Are Heroes

Take a look at his work here:

Continuing his series “Women” artist/photographer JR lands in Cambodia to layer photographical murals of it’s residents all over the Cambodian landscape.  Check out the rest of the pics: